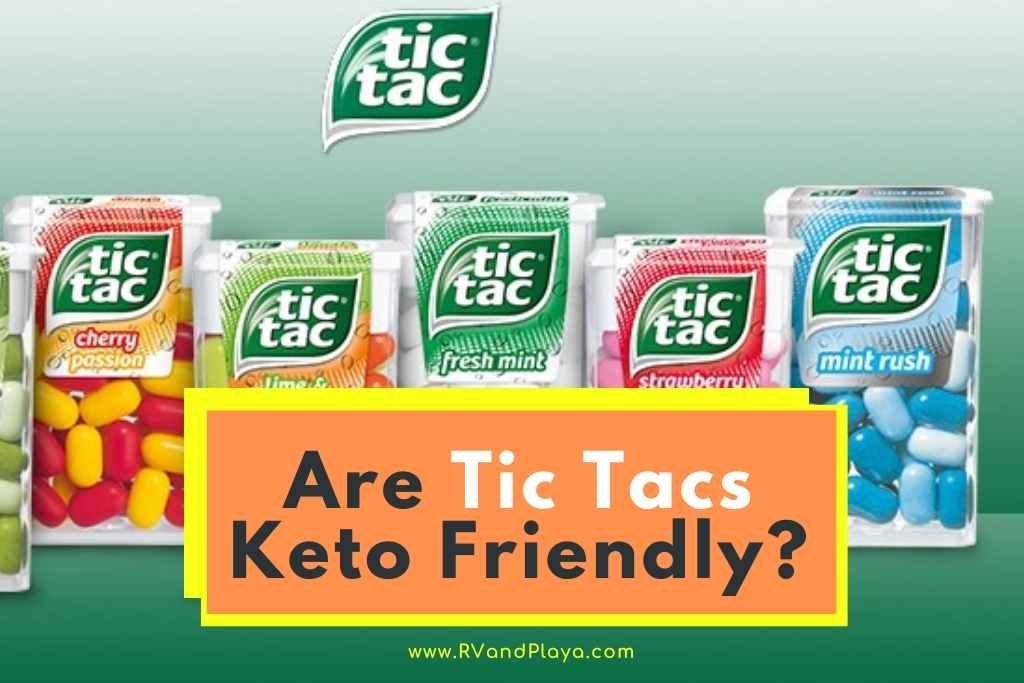 Figuring out what counts as keto friendly can be tricky. Some of the big stuff might be obvious, but what about the little things like breath mints. Can you eat Tic Tacs on a keto diet?

Technically, Tic Tacs are keto friendly since they contain less sugar than is prohibited in the keto diet. However, there are still ingredients in Tic Tacs that may make them a food to avoid for those on strict keto diets.

In this article, we will cover how many carbs tic tacs have as well as why they might not be considered keto friendly.

Additionally, we will delve into what keto friendly alternatives for Tic Tacs are available and if certain Tic Tac flavors are more keto friendly than others.

How Many Carbs Does Tic Tacs Have?

There are about two and a half grams of carbs in every five individual Tic Tacs.

This means that for every Tic Tac you consume, you are only accumulating half a gram of carbs. This falls way under the requirement for keto foods to be less than twenty grams per meal.

The amount of carbohydrates is so negligible, that you may not even have to count them toward your daily total.

If you ate an entire box of Tic Tacs, which is about forty individual candies, then you would reach the limit of your carb intake at twenty grams.

Something to consider when eating Tic Tacs though is that most of the candy is made of sugar.

Even though there is only half a gram of carbs in each piece, over 90% of the candy is sugar. You may as well be eating a pure sugar cube.

Why Might Tic Tacs Not Be Considered Keto Friendly?

Even though Tic Tacs are technically keto friendly according to the rule of carbohydrates, they also contain some ingredients that are frowned upon from the keto diet perspective.

Tic tacs are almost completely made of sugar which would not fly with any other food. The fact that there are so small masks the true weight of their carb contribution.

When it comes to the glycemic index of foods that affect blood sugar, on a scale of 0 to 100 – with 100 raising it the most – maltodextrin hits the high mark at 100.

Most flavors of Tic Tac also contain artificial flavorings and, worst of all, dyes. Ingredients such as these are not natural and may contribute to poor health so most keto diets advise that you avoid them at all costs.

Tic Tacs are considered dirty keto since they meet the requirements of being low carb, but still have a lot of unhealthy ingredients that do not pass the keto test.

Are There Keto Friendly Alternatives to Tic Tacs?

Don’t be discouraged if you’re trying to follow a strict keto diet so you cut out the Tic Tacs because of all the unnatural ingredients and crazy amounts of sugar.

There are plenty of alternatives that are keto friendly and just as delicious.

If you are looking for a mint that helps keep your breath fresh, staves off the snack cravings, and is keto friendly, the first thing to look for is the sweetener used. Instead of finding mints that have sugar in them, look for brands that use erythritol, monkfruit, or stevia.

Pur, LifeSaver, and Yum Earth all have great sugar free options in different flavors such as wintergreen, peppermint, spearmint, and cinnamon.

Ice Breakers and Altoids also have sugar free options and some of these even come in a gum variety to make them last longer.

Alternatively, you could make your own mints if you’re not too worried about the need to carry them around in a tin in your purse.

Keto butter cream mints are the perfect after dinner treat that is low carb and you know exactly what is in it because you made it.

Are There Certain Flavors of Tic Tacs That Are More Keto Friendly Than Others?

All Tic Tac flavors are mostly made of sugar, and they all contain maltodextrin as an added sweetener.

However, if you don’t want to give up your favorite Tic Tac mints, you can still compromise by choosing the most keto friendly flavor.

Freshmint Tic Tacs are the most keto friendly Tic Tac flavor because they do not contain the added dyes that the other flavors do.

The other mint flavors like spearmint and wintergreen do have added dyes but may have more natural flavoring.

The least keto friendly Tic Tac flavors are the fruity ones. These flavors not only have artificial flavoring but they also have the brightest colors which mean they contain the most amount of dyes including yellows and reds which are considered the most unhealthy.

If you want to be super strict on your keto diet, the best option is to not eat any Tic Tacs at all. However, if you find that you just can’t live without them, go with the freshmint flavor – there are no dyes and natural mint flavoring. However, you will still have to live with the high sugar content.

While Tic Tacs are technically considered keto friendly due to their carb count, they do contain other ingredients that disqualify them for strict keto diets.

When taken as a whole, keto is not just about the amount of carbohydrates you eat but also the kinds of food you allow into your body.

Tic Tacs only have half a gram of carbs per piece, but over 90% of each candy is made up of sugar. In addition, they have maltodextrin, artificial flavoring, and dyes – all of which are considered unhealthy.

If you want a more keto friendly alternative to Tic Tacs, try mints that are sweetened with stevia, erythritol, or monkfruit such as LifeSavers or Altoids.

Those little Tic Tacs may look innocent but they could pack a punch in your keto diet.

People also ask, are strawberries Keto friendly? The keto diet has grown popular for a variety of different reasons, it can aid in weight loss, potentially reduce the risk of certain cancers, and...

Continue Reading
link to Can You Eat Bananas on a Keto Diet? (Secrets Nobody Is Talking About)

Have you ever asked yourself or your friend if you can eat bananas or green bananas on a Keto diet? Well, you are at the perfect place to find the answer to such a question. Starting a new diet...