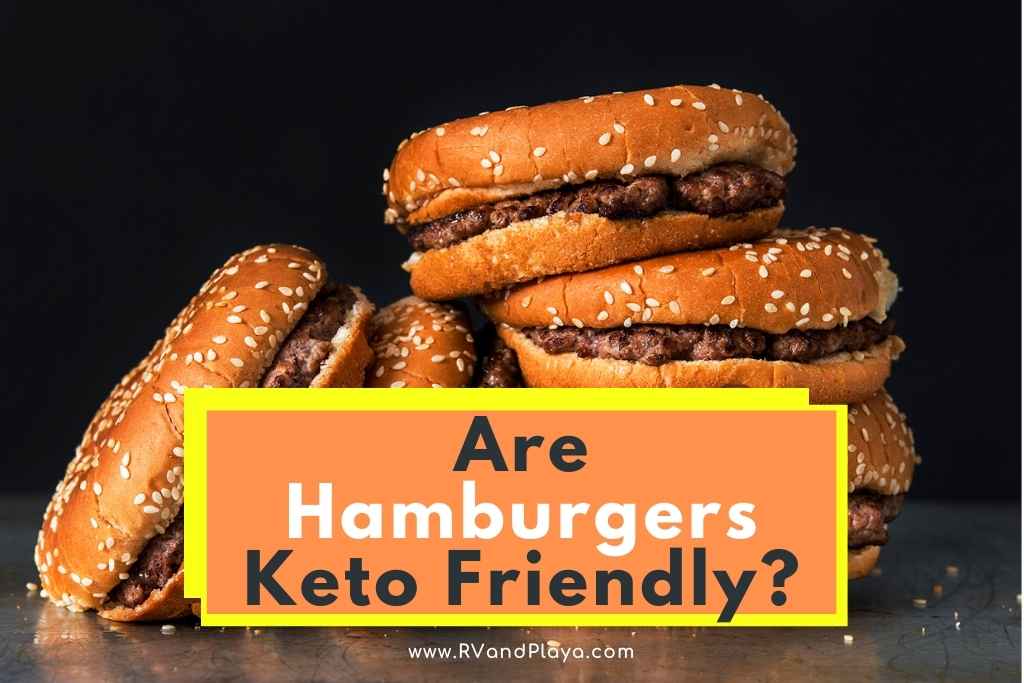 Lindsey, do you know if hamburgers are keto friendly or can you eat fast food on a keto diet? This is one of the questions our readers ask a lot. Well, we´ve got you covered.

Hamburgers can be keto friendly, but it depends on what you have on your burger and the type of bun you opt for. Quality hamburger patties can be a great source of protein and fat and are typically low in carbs, which makes them suitable for anyone on a keto diet. When things like condiments and carb-heavy buns are used, hamburgers become less keto friendly.

In the following article, we cover everything you need to know about whether hamburgers are keto friendly, including how many carbs they contain and what makes them keto friendly.

Hamburgers are typically keto friendly when you consider just the patty itself.

A quality hamburger patty by itself will typically contain no carbs and is full of protein and fats, which makes it perfect for a keto diet, in which low carbs and high protein are the main aims of most foods.

However, hamburger patties are rarely served alone, so it’s important to consider the other ingredients added to hamburgers.

While a hamburger patty is safe for a keto diet, the toppings and ingredients used to make a traditional hamburger can quickly make it unsuitable for anyone following a keto diet.

While hamburger patties alone are fine for a keto diet, the problems begin when you add other ingredients.

A hamburger bun is not only low in protein but is also high in carbs, meaning it is not suitable for a keto diet.

Other ingredients like condiments and sides are also worth avoiding as they are typically high in carbs and low in protein.

Read also >> Are Artichokes Keto Friendly? (All You Need to Know)

How many carbs are in hamburgers?

In a typical, high quality hamburger patty, it’s likely that there will be no carbs at all. This is particularly true of hamburgers when they are traditionally made, with no additional ingredients or a binder to hold ingredients together.

When other flavorings are included and a binder is used, hamburgers can become less keto friendly as the carb count increases.

It’s important to consider that while a hamburger patty itself might be low in carbs and high in protein, the other ingredients you add to a hamburger aren’t necessarily the same.

The carbs in a hamburger come from the bun and the condiments, which are usually high in carbs and low in terms of protein and fat.

A typical keto diet will usually recommend a daily allowance of around 25 grams of net carbs.

With all the toppings and French fries, a standard hamburger comes to around 70 grams of net carbs, showing how important it is to forgo the extras and stick to a traditional, simple hamburger.

Which hamburger toppings are keto friendly?

Any low-carb topping should be fine to add to a keto friendly hamburger. This is likely to be ingredients like vegetables, so things like lettuce, tomatoes, pickles, and onions should all be safe.

Certain types of mustard, particularly any made without honey, fruit, or sweeteners, are also keto safe, as they don’t contain carbs.

Some keto friendly ingredients are free of carbs, while others are likely to have a small amount.

Let’s look at how many carbs are in some of the more popular keto friendly hamburger toppings:

Which hamburger toppings should be avoided?

Look for toppings that are high in carbs and low in protein, as these ingredients should be avoided in a keto friendly hamburger.

In a typical tablespoon of ketchup, there are around 5 grams of net carbs, while a single slice of American cheese takes up 2.4 grams.

It’s easy to see how quickly these carbs can add up and make a hamburger unsuitable for a keto diet.

What are the benefits of a keto diet?

One of the biggest benefits of following a keto diet is weight loss, which naturally occurs when you cut out carbs and sugar.

Part of the process of the keto diet is that the body starts to use up fat as energy, which helps to cut out fat and is a vital step in the weight loss process.

The keto diet is also thought to help to treat and even prevent some diseases, like epilepsy. The diet has been used for nearly a century to help children with epilepsy.

Other diseases like metabolic syndrome and type 2 diabetes are also thought to be helped by following a keto diet.

Are there any downsides to a keto diet?

While a keto diet might have some health benefits, it is still a diet and poses some risks to certain individuals.

The diet requires you to restrict food groups and completely cut out others, which means you lose out on the nutritional benefits of these groups. This can cause nutritional deficiencies which can be dangerous.

The diet also requires an increase in high-fat foods, meaning you may need to increase the amount of unhealthy saturated fats in your diet.

These fats are not necessarily good for you in high quantities and can lead to health concerns such as raised cholesterol and an increased risk of heart disease.

It can also be very hard to keep up with a keto diet, which is important to get the long-term benefits of the diet. Eating fewer carbs can lead to feelings of hunger which can last for a few weeks and can be hard to cope with.

Alongside this, the diet can cause some people to experience flu-like symptoms at first, which can make it difficult to keep up.

Quality hamburger patties are full of protein and fat whilst being low in carbs, which means they are keto friendly.

However, it can be easy to make a hamburger unsuitable for anyone following a keto diet if the wrong ingredients are used to put the hamburger together.

One of the most important things you can do is avoid high carb, low protein ingredients.

When choosing to enter a diet, such as a keto diet, you might wonder if your favorite seasonings, such as garlic, are still on your 'to eat' list. Garlic has a strong, yet versatile flavor, and comes...