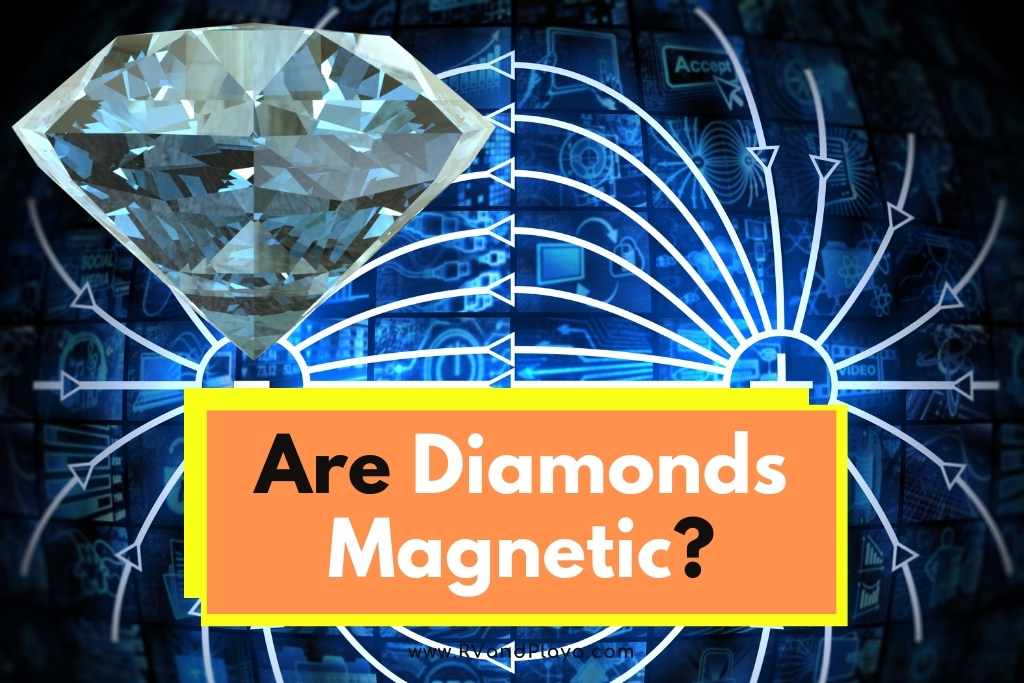 We all know that diamonds are attractive, but are they magnetic? Have you ever tried to test if a diamond is real using a magnet? Or have you come across a diamond that sticks to a magnet? Of course, diamonds are prized for their beauty, hardness, and durability, but are these super gems also tiny magnets?

Colorless natural diamonds do not stick to magnets. If a diamond sticks to a magnet (or repels a magnet) it is because of impurities in the diamond that are strongly magnetic, such as iron or nickel. Some lab-grown diamonds and diamond imitators may also exhibit magnetism.

Read on for everything you ever wanted to know about magnetic diamonds.

Is a Flawless Diamond Magnetic?

When we think about something being magnetic, we often think about it sticking to a magnet or repelling a magnet.

In this sense of being magnetic, a flawless natural diamond is not magnetic. A pure diamond will not stick to a magnet, no matter how hard you try! Diamonds are made of pure Carbon, which is not magnetic.

If you have a “diamond” that sticks strongly to magnets, you may want to test and see if it is a real diamond!

A real diamond that exhibits strong magnetism will do so because of the magnetic properties of impurities or inclusions found in the diamond, not the diamond itself. If you have a magnetic diamond, look at it with a loupe or under a microscope.

In fact, some scientists seek out diamonds that contain iron impurities precisely because of the magnetic qualities of iron.

Keep in mind that we are talking about the magnetic properties of loose diamonds. If you have a diamond set in jewelry, you may notice it is attracted to a magnet because of the properties of the metals in its setting.

Your setting may contain a core of nickel or trace amounts of iron.

Read Also >> Are All Diamonds GIA Certified? (All You Need To Know)

Why is a Diamond Not Magnetic?

All matter is a little bit magnetic due to the physics of electrons, but when we think about magnetism in everyday life we tend to think more about substances with strong magnetism that we can observe with our naked eye.

Iron, Cobalt, and Nickel are metals that exhibit strong magnetism. These metals are known as ferromagnetic.

Diamonds are made from Carbon, which is known as diamagnetic–matter that is weakly repelled by a magnetic field.

The magnetism is so weak we can’t observe it in daily life.

The pure white diamond (pure carbon) does not have observable magnetic properties. But what about diamonds with a lot of impurities? Most colored diamonds have color because they were formed from Carbon along with another substance.

For example, yellow and orange diamonds often have traces of Nitrogen that make them yellow. A blue diamond is blue because of traces of Boron. Green diamonds contain traces of Sulfur.

Along with these colorful trace elements, you may find iron or nickel in a colored diamond, which would make it somewhat magnetic.

Black diamonds often contain traces of graphite, hematite, or magnetite, which may make them magnetic or electrically conductive, though generally, the magnetism is very weak.

Some diamond substitutes do exhibit stronger magnetism, such as Gadolinium Gallium Garnet.

In colored varieties, diamond imitators Cubic Zirconia and Yttrium Aluminum Garnet may also show some magnetic attraction. This is due to the substances used to produce the color in the gem.

If you have a diamond that sticks to a magnet, it is possible you have one of these diamond substitutes instead. Though if your stone has visible inclusions, that may be what is causing the magnetic attraction.

Sometimes. For the most part, lab-grown diamonds are identical in chemical structure and appearance to natural earth-grown diamonds.

In some studies, lab diamonds are grown in a high pressure high temperature environment (HPHT) (similar to how they would form naturally) have exhibited some magnetic properties.

This is probably due to impurities present during the manufacture of these diamonds.

Lab-grown diamonds that are created using Carbon vapor (Chemical Vapor Deposition, or CVD) do not exhibit magnetic properties greater than earth-grown diamonds, probably due to the fact that impurities can be better controlled in the manufacturing process.

In many (but not all) cases, you will not be able to use magnets to determine whether a diamond is earth-grown or lab-grown.

Only sophisticated equipment can determine whether a diamond is lab-created or earth-created.

Can You Make a Diamond Magnetic?

Some elements can be made into magnets by aligning them with other magnets and causing their magnetic fields to align. This is true of ferromagnetic elements such as Nickel and Iron.

However, since the Carbon in a diamond is diamagnetic, it cannot be made to be magnetic. This is true of the vast majority of gemstones, which are typically not magnetic.

It is possible for impurities in a diamond to be magnetic, however, and scientists sometimes use diamonds with Iron inclusions as magnets for research purposes.

Everything on earth is made up of atoms, which are made of a central nucleus circled by electrons that carry an electric charge.

In the case of magnets, the element has more electrons spinning in one direction. If a strong magnet comes into the electric field of one of these elements, the element will also become a magnet.

Carbon (which makes up diamonds) has an equal number of electrons that spin opposite each other, which means the magnetism of diamonds is canceled out.

Diamonds don’t conduct electricity because they don’t have extra electrons.

Is it Safe to Wear Magnetic Jewelry?

For most people, magnetic gems and metals are completely safe to wear on a daily basis. The magnetism in most jewels is weak because it is due to trace elements in the stones.

In addition, jewelry is small and you would need a much larger magnetic force to cause damage.

Some people even find that magnetic jewelry can alleviate the pain of some common ailments such as arthritis.

If you are concerned about the effects of wearing magnetic jewelry, make sure to ask your doctor.

How Do I Know If a Magnetic Diamond is Real?

If you have done the magnet test on your diamond and it is drawn to a magnet, should you assume it isn’t real? No, but you should do your best to determine if you have a real diamond.

If you have a lab-grown diamond that was created using HPHT technology, it is still a real diamond and the magnetism comes from tiny impurities.

These impurities cannot be seen with the naked eye. In every other way, your stone will be chemically and optically just like a natural diamond. (Natural stones have magnetic impurities too.)

The only way to be completely sure if you have a real diamond is to have a trusted jeweler evaluate your stone. In the meantime, you can try a few other tests to give you more information about your diamond.

It’s best to do these tests with a loose stone rather than something in a setting.

Note that lab diamonds and natural diamonds will perform the same way using these tests.

If you drop a diamond into a glass of water, it will sink to the bottom because of the density of the stone. A fake diamond will float either on top or below the surface.

Fog up your stone with your breath. If the condensation stays on the stone, it is probably a fake. A real diamond is generally very highly polished and will not have the microscopic grooves that hold the foggy condensation of your breath.

Some diamonds have fluorescence. If you hold your diamond under a black light and it shines blue, it is real.

If it looks yellow, green, or gray, it probably isn’t. Keep in mind that some diamonds don’t have fluorescence, so if it doesn’t turn any color under a black light, it may still be real.

Put your diamond face down on a dot or newsprint. If you can read the print or see the dot through the top, it probably isn’t a diamond.

Typically diamonds reflect light and aren’t “see through” in the same way glass would be.

What Gemstones Are Magnetic?

Are Any Stones Magnetic?

You will be able to observe the magnetic properties of lodestones, which are pieces of Magnetite. Lodestones are naturally occurring magnets that can attract Iron.

Magnetite looks black or brown with a metallic finish.

Tiger’s Eye is made from Quartz, which on its own is not magnetic. However, Tiger’s eye may contain trace amounts of Hematite, which may cause it to show a strong magnetic attraction.

Hematite is an iron-based mineral that is sometimes used for healing due to its magnetic properties.

Generally no, though some research shows slight magnetism in Gold when heated. If you have Gold or Silver Jewelry, it doesn’t have strong magnetism.

Platinum, like Gold, is only weakly magnetic. If your jewelry is made of gold, silver, or platinum and shows magnetism, it is probably because the jewelry has a core that includes some type of iron or nickel.

The vast majority of diamonds are not magnetic, and the ones that only demonstrate magnetism are because of the impurities locked in the stone, not because of the diamond itself.

If you find yourself with a diamond that sticks to a magnet, check it out. It may have Iron inclusions that are magnetic, or it may not be a diamond at all.

A diamond may attract a person you really like, but not because it’s a magnet!

link to Are All Diamonds GIA Certified? (All You Need To Know)