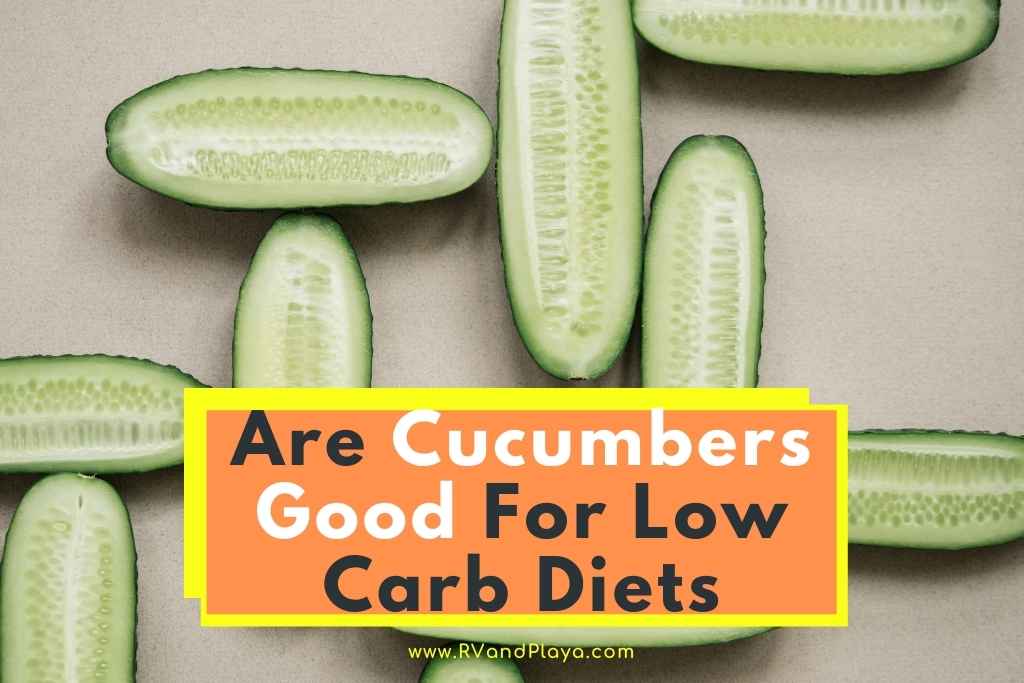 Do you know if cucumbers good for low carb diets are? this is one of the questions our readers ask a lot. Well, we´ve got you covered.

When it comes to low-carb diets, vegetables are a popular component. Cucumbers, lettuce, celery…all of these are popular choices for low carb vegetables, but are they really as good as their reputation?

We’ll look at the benefits and possible downsides of cucumbers, and their potential place in various diets.

According to various sources, the baseline measurements for cucumber nutrition are as follows:

One cup of chopped cucumber is approximately 104 grams. (4 grams carbs)

A medium whole cucumber has about 6 grams of carbs.

What Does The Nutrition Information Mean In Terms of Low-Carb Diets?

Cucumbers are incredibly low-carb diet friendly. They make a good snack, or a good addition to a meal, without a lot of calorie or carb impact.

That doesn’t mean they don’t add up. If you’re watching your carbs or dieting to a strict caloric limit, it’s easy to wind up consuming more of either than you intend to.

On the other hand, they can be pretty filling. So as a snack, they can make you feel full without making a big dent in your intake.

Overall, according to Healthline, Cucumbers are in the top 20 vegetable choices for low carb and ketogenic diets.

What Are The Health Benefits of Cucumbers?

Cucumbers are best known for containing a compound called cucurbitacin E. Studies indicate it may be good for brain health, and possess anti-inflammatory properties.

They’re reported to be a fair source of Vitamin K, Vitamin B, Vitamin A, and other minerals.

They also contain a high percentage of water – up to 95 percent. This can help maintain your hydration levels.

What Benefits Do These Vitamins and Minerals Have?

Vitamin A: Helps your vision and immune system.

While there are limited amounts of each of these beneficial nutrients, the amount can add up, just like carbs and calories. A medium cucumber, for example, can have as much as 57% of the daily recommended value of Vitamin K.

What Is The Recommended  Daily Serving of Cucumbers?

There isn’t a set limit on how much cucumber should be consumed on a daily basis. Because cucumbers are mostly water, it’s hard to eat enough of them to result in any negative effects.

One to two cucumbers a day isn’t too much, unless you’re on certain medications such as blood thinners.

The recommended number of servings of vegetables per day is 4-5. How many of those servings involve cucumbers in some form is up to you.

According to all sources, Cucumbers are EXTREMELY keto friendly. High water content, nutrient-dense, and low carbs.

The carbs can add up, even with the relatively low numbers found in cucumbers, so you’ll need to watch your intake and calculate your macros.

That being said, a single large cucumber can equal the entire daily serving of vegetables, and only about 10 carbs total.

When it comes to being ketogenic, cucumbers are best as a snack, or part of salad.

Peeling the cucumber can lower the carb content, but it may also remove some of the nutritional benefits.

Are Cucumbers Good For Weight Loss?

According to experts, cucumbers are excellent for weight loss.

They’re mostly water, which means they can fill you up without too many calories involved. This can help keep your metabolism running at a higher level, and burning more stored energy sources than consumed.

Being full also reduces your desire to consume additional foods, which means your overall intake will be lower over the course of the day.

Since being at a controlled caloric deficiency is a key component of weight loss programs, cucumbers can be a helpful way to handle your intake needs.

What Are The Healthiest Low-Carb Ways to Prepare Cucumbers?

Washing and slicing cucumbers is the quickest, easiest and healthiest way to prepare cucumbers for eating.

– Adding them to a salad is also a good option, and allows you to mix them with other beneficial vegetables, like lettuce and tomatoes.

– One recommendation is to add cucumber and mint to water for a refreshing drink.

– With Garlic, Mint and Greek Yogurt, it can be a great addition to a curry.

– They can be blended with other vegetables to make a green juice.

There are plenty of other methods of preparation, but these are some of the easiest to manage, and can also be kept as some of the most stable.

Are There Any Forms of Cucumber Preparation that are NOT Recommended?

There aren’t any specific listed methods of preparing cucumber that are specifically NOT recommended. However, if you’ve got specific dietary considerations, you may want to be careful about some methods:

– Cooking with a lot of oils

– Pickling can have adverse influences, though it depends on what type of brine you use.

– Cooking for too long can result in losing a great deal of nutritional value.

Are There Any Diets For Which Cucumbers Are Not Recommended?

There aren’t really any specific diets that consider cucumbers a bad addition to the meal plan. There are, however, certain health conditions that may require being cautious in your cucumber intake.

– Some people may have allergic reactions to cucumbers, or specific forms of cucumber preparation

– Blood thinners and some other medications can require limitations on the levels of cucumbers you can handle.

– Watch your levels of Vitamin A and Vitamin K.

Are There Any Negative Health Consequences Attributed to Eating Cucumbers?

However, many cucumbers may be exposed to certain pesticides. It’s best to make sure you wash them thoroughly to remove any trace toxins or chemicals.

link to Are Peanuts Good For Ketosis (Nuts, Carbs, Benefits - All You Need To Know!)

Do you know if peanuts are good for Ketosis? this is one of the questions our readers ask a lot. Well, we´ve got you covered. Are you on a ketogenic (keto) diet and are you wondering if peanuts...

Continue Reading
link to Is Grilled Pineapple Keto Friendly? (Keto Diet - All You Need to Know!)

Have you ever asked yourself or your friend if grilled pineapple keto-friendly for your diet is? Well, you are at the perfect place to find the answer to such a question. Pineapple is known as the...