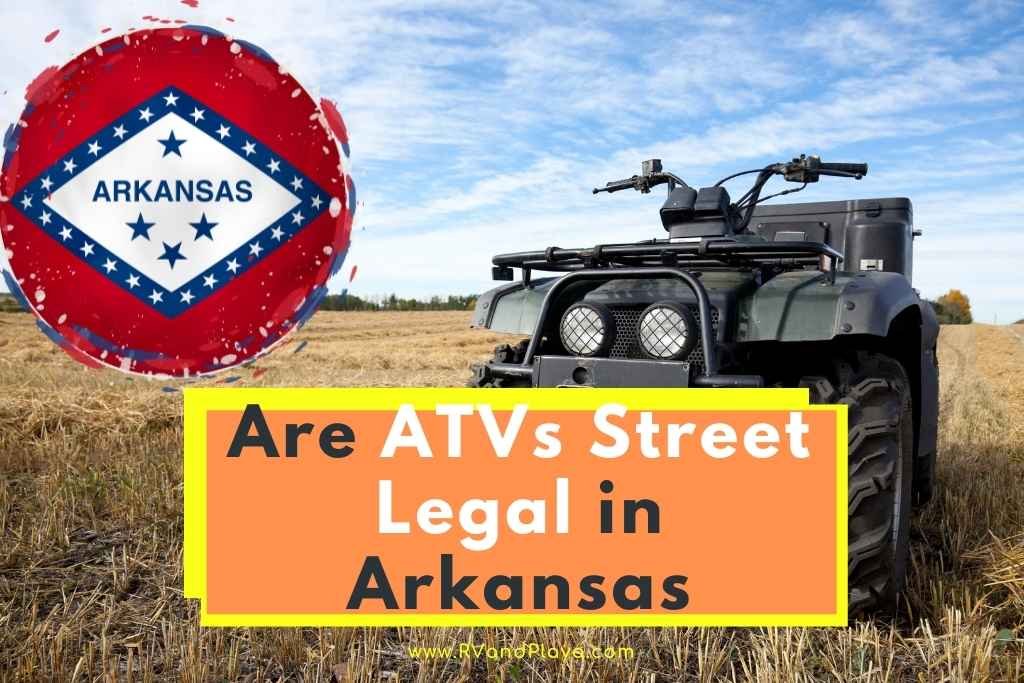 Have you ever wondered whether ATVs are street legal in Arkansas? Well, look no more because we have all the answers you need, straight from the source.

Whether you have just bought or planning to buy an ATV, there are some things you need to know before you fire it up and start having adventures riding it.

First and foremost, are they street legal? Can you ride them on public roads and streets?

ATVs and similar off-the-highway vehicles are not allowed on public streets and highways in Arkansas. But there are several exceptions to this rule, and you can ride them under certain conditions.

Without further ado, let’s get into more details about this matter, as lack of knowledge could get you fined if you are caught riding an ATV where it is not allowed.

Are ATVs street legal in Arkansas?

As I’ve said above, ATVs per law are not allowed on public streets and highways, as per Code Title 27, but there are several exceptions.

The first exception is for hunting or agricultural purposes. If it is needed to travel by a street or highway from one hunting area to another, or between two privately owned agricultural properties.

Riding between two private properties owned by you. In this case, it is allowed for you to use an ATV if these properties are not more than 4 miles from each other, and you have on you a proof of ownership or lease for both of them.

If you have a disability and have one or both legs amputated above the ankle. In such a case, you are allowed to use all of the state roads and streets except the interstate highways.

Another exception is the unpaved roads outside of the incorporated city limits, where you can freely ride ATVs without any restrictions unless they are part of public or private parks. If such is the case, ATVs are allowed only on roads and trails specifically designated for them.

Can I ride an ATV on public lands in Arkansas?

While there are no explicit laws banning or allowing the use of ATVs in national or state parks, and other public lands, outside of the public roads, ATVs are not allowed everywhere.

Whether you can ride an ATV on public land depends on the decision of the authority in charge of that public land. In some parks, ATVs are banned.

But, there are many parks that allow riding them, and actually have designated trails just for ATV and OHV use.

Ozark National Forrest, Carter Off-Road Park, Mack’s Pine Recreational Area, and Hillarosa ATV Park; are just some of the areas with designated off-road trails that you can enjoy in Arkansas.

Can I ride an ATV on private lands in Arkansas?

Yes, the use of ATVs on private property is practically unrestricted in Arkansas. With the exception that property owners are allowed to restrict their use.

While no laws forbid their use, the policy of many private parks and recreational areas is to not allow them.

But, a larger number of private recreational parks geared toward off-road adventure exist. And they allow ATVs, and many even have an option for renting their vehicles, if privately owned ones are not allowed.

Overall, it is much easier to find a recreational park that allows ATVs, than one that doesn’t.

Do I have to register or title an ATV in Arkansas?

Titling and registering of ATVs is required in Arkansas, and you must do it within 30 days of purchase.

Both registering and titling can be done in any local office of the Department of Finance and Administration and costs just $5 in fees.

To have your ATV registered you will require the Manufacturer’s Statement of Origin, and signed bill of sale.

In case you are not able to provide any of these two documents, you can post a bond in the amount of the 1 and a half fair market value of the ATV you are trying to register. Such bond is payable for the period of three years, in other words for as long as the registration is valid.

It is to be used for settling any legal claims from disputed ownership, for example, if you have inadvertently bought a stollen used ATV.

Do I need a driver’s license to operate an ATV in Arkansas?

To operate an ATV in Arkansas you do not need a driver’s license. And also, there is no minimum age requirement either.

On private properties, a person of any age can legally ride an ATV. But on public properties, where ATVs are allowed, the minimum age is 12 years, while younger riders must be accompanied by a person of 18 years or older.

Are helmets mandatory in Arkansas?

Helmets, when riding an ATV, are not required by law in Arkansas. But every ATV must be equipped with working brakes, a proper spark arrestor, and a muffler.

Also, when riding between a half-hour before sunset and a half-hour after sunrise, the ATV must be equipped with both headlights and taillights, and they must be turned on.

In case you are allowed to use an ATV on public roads due to disability exceptions, you need to have certainly visible markings on your vehicle.

More specifically, you are required to have a red flag that is at least six inches wide and at least a foot long, attached on a pole at least three feet above the vehicle’s seat. And also have a physician’s certificate of your disability on your person.

Buying and owning an ATV in Arkansas usually comes with some questions attached to it. One of them is are ATVs street legal in Arkansas?

The answer in short is that they are not really. They are generally banned from public streets and highways, except in the case of some exceptions.

In addition to this, ATVs are also allowed in many public parks, and a large number of public off-road trails exist specifically intended to be used by ATVs. link to Are ATVs Street Legal in Arizona? (OHV Laws To Know!)

Have you ever wondered if ATVs are street legal in Arizona? Well, look no more, because we have all the answers regarding the street legality of ATVs, how to make them street legal, and when you do...

ATVs or All-Terrain Vehicles are probably the most fun a person can have on four wheels without going above 100mph. But owning one is not the same as just having some fun riding them or using them...